WEST TISBURY - In his workshop overlooking an old sheep pasture, piano technician David Stanwood spends his days rebuilding pianos according to complex mathematical formulas he has invented, with names like "strike weight" and "key ratio." 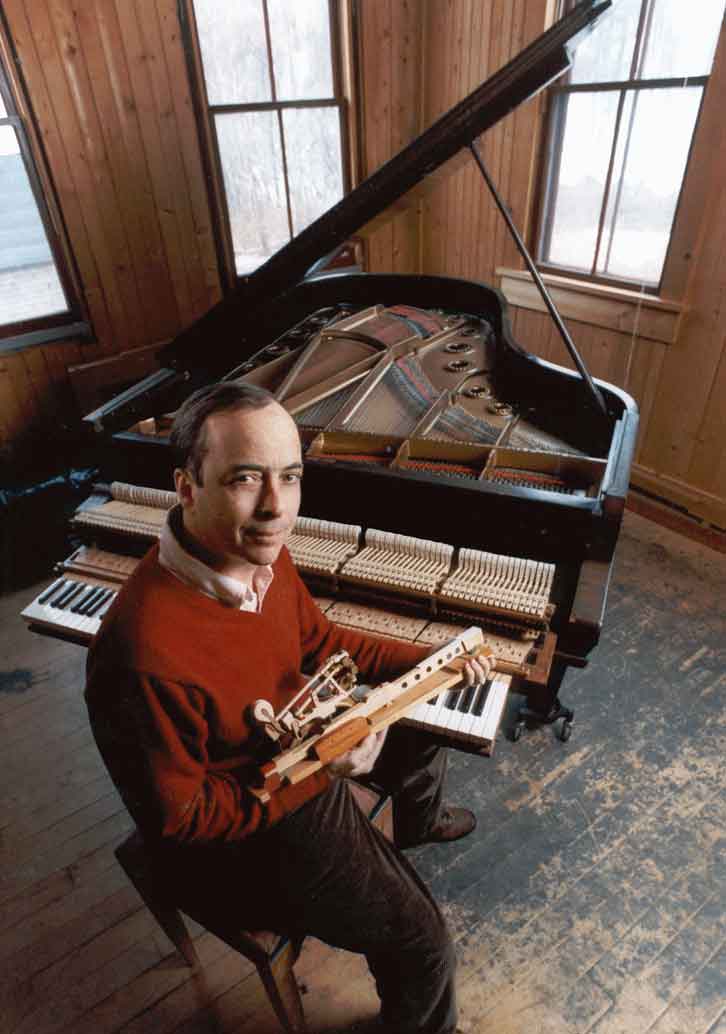 Up in Boston, pianists such as Michael Lewin of the Boston Conservatory play on pianos Stanwood has rebuilt and marvel, not at the physics of his work, but the feel it creates - ``the fair chance,'' in Lewin's words, ``to play beautifully.''

Mixing algebra and artistry, Stanwood has perfected a rigorous new system of readjusting and rebalancing pianos that many musicians and technicians familiar with his work say could revolutionize 300 years of piano design and construction. With two US patent applications pending, Stanwood has generated interest from some big piano manufacturers, including Steinway & Sons.

According to industry estimates, US residents own about 10 million pianos, making them the second most popular home instrument after the guitar. Some 2 million students start piano lessons every year (although how many drop out is not known).

Stanwood's system of rebalancing keys is geared not toward beginner or average players but to masters, many of whom suffer from tendinitis and muscle afflictions caused by constantly readjusting to different pianos or playing instruments that have sticky or excessively heavy keys.

Several Stanwood clients have said their stress injuries and carpal tunnel syndrome cleared up once he reworked their pianos. But at a cost of $1,000 to $5,000, Stanwood's treatment is beyond the reach of the average family with an upright piano in the living room.

Though pianos are masterfully crafted instruments involving as many as 12,000 parts and costing into the tens of thousands of dollars, even the best can be notoriously erratic.

From key to key, Stanwood has found, the amount of exertion required can vary by 25 or 30 percent - enough to be noticeable and annoying to virtuosos. For a pianist, the effect can be like running up and down a set of stairs where no two steps are the same size.

Stanwood completed his training as a piano technician at Boston's North Bennet Street School in 1979. He worked for years afterward to try to understand and correct the physical vagaries of pianos.

Dissecting the innards of the 88 keys, and using computers to depict the variations in weight and playing exertion required on each key, Stanwood perfected in 1992 an algebraic formula that helps guide him in rebuilding pianos to mathematical smoothness.

The black and white keys of a piano are just the leading edge of an elaborate mechanical system that, by the time a note is struck, involves the movement of three levers subject to at least 35 variables like friction, leverage and the mass of the key and the felt hammer it drives against the strings.

For decades piano action adjustment has generally involved inserting extra pill-sized lead weights in the keys, usually under the white or black surface - but that can have the effect of demanding more and more exertion from pianists.

Stanwood's approach involves weighing the components of each piano key, plotting them on his computer, then modifying them by sanding wooden hammer shanks or adding or subtracting leads. He and technicians he has trained have reworked more than 200 pianos according to his system, including instruments at the Longy School in Cambridge and at Boston Symphony Hall.

``He has been for many years on the cutting edge of action modification,'' said Stephen Brady, a Seattle technician and editor of the Piano Technicians Journal. Brady said Stanwood has developed ``very valuable tools'' that have attracted interest nationwide from ``technicians in the upper end of the field.''

Bruce Stevens, president of Steinway, said, ``We are in the process of looking at it,'' but declined to say whether Steinway envisions buying a license to use Stanwood's techniques.

``For sure, for absolute sure, there's a good market for that process in the aftermarket,'' Stevens said. ``Pianists all like different touches.'' Though Stanwood's technique ``is not rocket science,'' Stevens said, ``it's a very sound, fundamental, logical approach.''

Lewin, an international recording artist who has played Stanwood-repaired pianos at the WGBH-FM studio and at the conservatory's concert hall, said, ``I don't really understand what it is, but he's found a system that's just super. You can play with evenness and fluidity.''

Victor Rosenbaum, director of the Longy School of Music in Cambridge, said, ``All the technicians I've talked to are very admiring of this technology. It's a significant breakthrough.''

Tony McKenna of Belmont, who services WGBH's German-made Steinway and many other Boston-area concert pianos, said Stanwood's approach has helped salvage pianos that ``felt like tanks'' or were even deemed unplayable, including the Symphony Hall Baldwin, which many pianists once denounced ``with four-letter words'' before Stanwood rebalanced it.

Stanwood, an avid sailor and father of two who first studied photographic engineering at the Rochester Institute of Technology, does most of his work in an old barn-turned-workshop overlooking his pasture, now planted with fruit trees and filled with songbirds and the occasional hawk. When he has time to play, his taste runs toward jazz pieces of his own composition.

Though he looks forward to a day his patents yield enough licensing income to let him spend summers at play on Martha's Vineyard, sailing around Nantucket Sound, he also looks forward to hearing new generations of pianists freed to make the kind of music they never could have otherwise.

``The most common comment I get from people is, `I never could play like this before,''' Stanwood said. ``I love helping people and making them excited, especially people who are in pain.''